#StandWithMueller
Home Book Reviews My Review of Tom Nichols’ “The Death of Expertise: The Campaign Against... 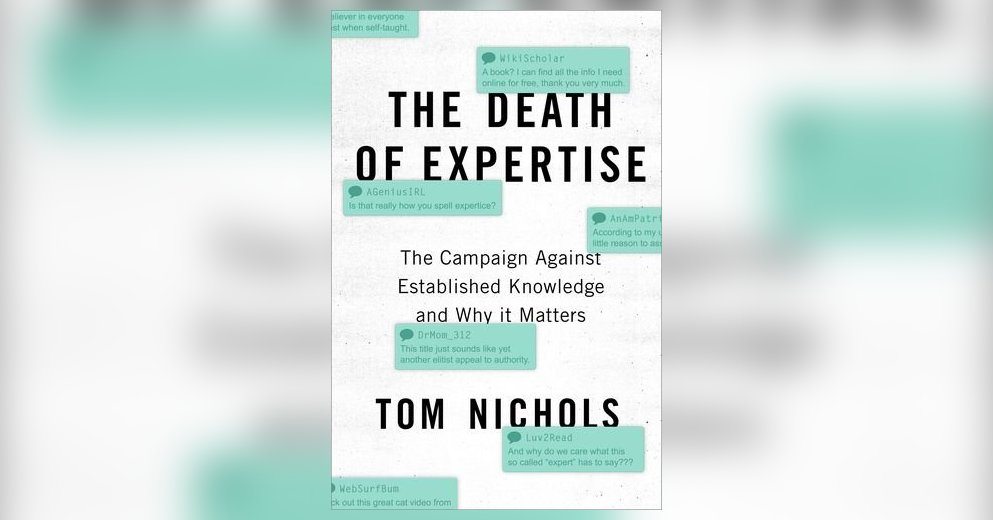 The Death of Expertise: The Campaign Against Established Knowledge and Why It Matters by Tom Nichols
My rating: 5 of 5 stars

We live in a time in which there is more information available at our fingertips than ever before in the course of human history. Consequently, it seems as if our attention spans are shortening and the overflow of information available at our disposal has in a way made us less intelligent in terms of basic critical thinking skills which include reasoning and logical skills. For a myriad of reasons this has led to the death of expertise as the author Tom Nichols phrases the cultural phenomenon that has taken root within our society and culture. Lest people believe that this is harmless without any real-world implications, one must not only look at the flow of misinformation and disinformation that flowed within our electoral process. This made it difficult for laypersons to be able to spot and distinguish accurate information from disinformation. This lack of trust in what we can term as a lack of trust of experts within our society has led to the disintegration and widespread distrust of our institutions writ large. Such a breakdown has enabled outside nefarious actors to take advantage of this vulnerability within our society at large and cause further disintegration as we have seen take place since the so-called election of Donald Trump. In order for us to better address this issue with both its causes and solutions, we must better understand the phenomenon that is occurring. In doing so, the author and intellectual Tom Nichols makes a most convincing case of the deterioration of the trust between laypeople and experts and what that means in terms of societal and real-world implications.

The real-world implications of the death of expertise or the campaign against established knowledge do not result simply in the disruption of our political process by outside nefarious actors, but it can result in much more severe and grave circumstances as the author Tom Nichols notes with the “AIDS denialists” phenomenon that took root in the early 1990s (Nichols, 1). There was a small group of these denialists who pushed this phenomenon outside of the United States as it caught root in South Africa when the President at the time Thabo Mbeki took notice of the denialists and what were the spurious claims that were being put out from the other side of the world. Mbeki came to believe that AIDS was not caused by HIV but rather from other factors such as malnourishment (Nichols, 2). As a result, Mbeki and his government refused outside help of drugs and other forms of assistance to help treat the disease which would have helped prevent HIV among newborns which the drugs could assist with (Nichols, 2). As a result of this ignorance and a lack of trust of the expertise of the vast majority of scientists and medical professionals, it is estimated that three hundred thousand lives and the births of thirty-five thousand HIV-positive children could have been avoided if Mbeki had followed the advice of scientists and medical professionals that were urging him to accept outside relief and assistance. Imagine the situation in which the deaths of over 300,000 lives including tens of thousands of children could have been avoided if it wasn’t for this distrust in medical professionals and outside expertise which could have helped alleviate and lessen this problem in which hundreds of thousands of less people would have perished from the face of this Earth. This is the sad consequence and just one example in which a distrust of experts and established knowledge caused the deaths of hundreds of thousands of people which could have otherwise been prevented. A monstrosity indeed.

Principled, reasoned, informed arguments in which we are open minded to the facts and evidence to changing or altering our preexisting viewpoints are the hallmarks of intellectual and moral honesty. Instead of being skeptical but critical readers of information, so many within society at large have come to not only be skeptics but to actually disdain experts and the concept of expertise. What are the causes of such maladies? There are various reasons and theories that can help explain these phenomena within the various contexts and circumstances in which they occur but I believe based on the evidence and reasoning provided by Mr. Nichols that one significant contributor are the vast amounts of information available at our fingertips. Coupled with a lack of critical thinking skills being taught within our educational system, it has made it more difficult for everyday consumers and laypersons to be able to differentiate between valid sources and information from the vast amounts of junk, disinformation, misinformation and other quackery available freely via the information superhighway. Additionally, what has contributed to this phenomenon has been the advent and widespread use of smartphones in which we are able to stay connected to our devices and our computers twenty-four hours a day. As Mr. Nichols points out, “not only do increasing numbers of laypeople lack basic knowledge, they reject fundamental rules of evidence and refuse to learn how to make a logical argument” (Nichols, 3). Nichols argues and makes a rational and convincing case that “the death of expertise is not just a rejection of existing knowledge” but that “it is fundamentally a rejection of science and dispassionate rationality, which are the foundations of modern civilization” (Nichols, 5). Indeed.

If you were asked a simple question on foreign aid, would you be able to answer it? Before reading further, please take a guess at the following question. How much foreign aid as a percentage of the national budget do, we give to other nations for development and other aid? If you guessed 10% you were quite off. If you guessed 5% you were still off. The amount of the federal budget that constitutes foreign aid is less than three quarters of one percent of our annual budget. Seemingly shocking, the average American when asked this question believes that over 25% of our annual budget goes to foreign aid (Nichols, 27). Without a baseline of facts that we can all agree with, then argumentation and disputation become nearly impossible. This is one of the primary reasons that I believe that the death of expertise and the campaign against established knowledge is so harmful and detrimental. If we are unable to agree to a baseline of facts such as 1+1=2, then how can we progress as a society and as a civilization at large? These are very pressing questions and concerns facing it now as we approach 20 years into the new millennium.

Tom Nichols is a brilliant writer and a brilliant intellectual who has provided his expertise to laypersons like you and me. I highly recommend “The Death of Expertise: The Campaign Against Established Knowledge and Why It Matters.” It most definitely does matter.