#StandWithMueller
Home Book Reviews My Review of Omarosa’s “Unhinged: An Insider’s Account of the Trump White... 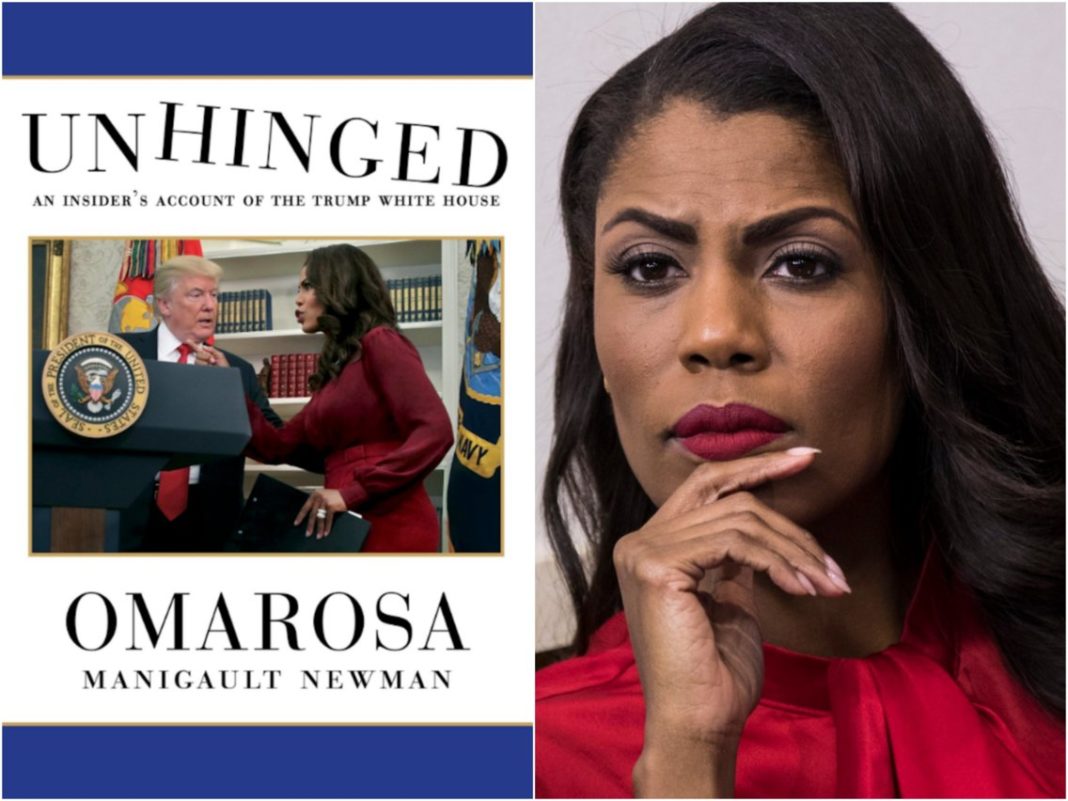 Unhinged: An Insider’s Account of the Trump White House by Omarosa Manigault Newman
My rating: 4 of 5 stars

Omarosa’s “Unhinged: An Insider’s Account of the Trump White House” is a gripping exposé that takes us through the life and trials of Omarosa from her earliest times to her time to the White House and immediately following that. A word of caution, this book is not solely about her time at the White House but also provides insight not only to her life story but also to the fifteen or so years that she had gotten to know Donald Trump from appearing on “The Apprentice” television reality program. Considering this, I am an avid reader of a variety of books that helps one understand the person that is Donald Trump because understanding the person occupying the highest office in the land is of vital importance for us as a people and as a nation. It is of vital importance on both a societal scale as well as to the national security implications that such a person can have on the lives of people not solely in our nation but of millions of people worldwide.

In considering the validity and accuracy of the book, one must only turn to other authoritative books written on the Trump White House. Namely, Bob Woodward’s “Fear”. Omarosa was in a high position within the White House in which she had regular contact with the occupant of the highest office in the land and she has the evidence to prove it. Since the release of her book, “Unhinged”, we have seen and heard the constant revelations that she has provided to the public in the forms of audio, text messages and personal recordings including the recording in which John Kelly summoned her into the Situation Room to let her go. Taking into account both Omarosa’s account, which she has backed up with evidence along with other books such as Woodward’s aforementioned, “Fear”, I would state that Omarosa’s account is fairly accurate and reliable. This is particularly true with the specific instances and scenes that she portrays inside the Trump White House as well as her time with Donald Trump during “The Apprentice”, the election campaign of 2016 in addition to the transitional period before Donald Trump was installed to the office of the Presidency.

Omarosa is a unique individual who has taken polarized positions in the past in terms of her appearances in the media so once must also consider this. There is no doubt that her long history with Donald Trump provides her sharing a narrative that is unique and helpful in understanding the sociopathic malignant narcissist that is Donald Trump. Omarosa herself seems to be a bit of a narcissist but she definitely is not a narcissist without the basic human emotion of empathy. She is capable of employing and expressing empathy with the various work that she has done in her own personal capacity both before she worked in the White House and even afterwards. Additionally, she grew up as a black woman from the projects, witnessed the death of her father, and experienced the death of her brother later on in life. Her upbringing and being raised by a single mother with a big family was not a circumstance that is most favorable to most people that were put into her situation. Her narcissism may have inflicted defense mechanisms for her to be able to cope and succeed in life. Human beings are complicated in their disposition and character. As long as she is able to express empathy on a micro and macro scale, then I have no problem with believing that although she may be outspoken and vocal in addition to having defended Donald Trump in the most horrid of ways, she has now apologized for her “complicity” as she calls it and is now seeking atonement. You may or may not believe her to be genuine in this regard but I will give her the benefit of the doubt based on her life history, upbringing, perseverance and success in life. As she herself states in her book, at a young “tender age, I learned the bittersweet complexity of life, that joy and pain are two sides of the same coin” (Omarosa, 23). I can appreciate the fact that after leaving the White House she has been able to admit her complicity and has asked the public for her forgiveness.

As mentioned earlier in this review, Omarosa’s provides snippets and insights into actual scenes and circumstances in which she relates an insider’s account as to the person that is Donald Trump. In addition, Omarosa’s relates situation after situation in which the reader is able to expressly see the insecure, needy and petty individual that is Donald Trump. Omarosa also shared several scenes in which she was around Donald Trump and his daughter Ivanka that made her and everyone else in the room quite uneasy. There definitely seems to be some perverse infatuation between Donald Trump and his daughter. Moreover, as most people know, Donald Trump is an individual that lacks the basic human emotion of empathy. As Omarosa says, this is a person that she has known to be a “human being” possessing a “complete and total lack of empathy” (Omarosa, 118). Omarosa’s book most definitely provides an overall picture of Donald Trump with the specificity of being able to relate with Omarosa’s picture in mentally and visually being able to picture being in the same room as this nincompoop occupying the highest office in the land.

Most people do not know but Omarosa also had previous stints working in politics including working with Vice President Al Gore and subsequently a short stint in the Clinton White House as well. Omarosa may be many things and some people describe her in scornful terms, but there is no doubt that she possesses a level of intelligence and wit to be able to have come as far as she had. Again, human beings are complicated. Does she come across as a bit narcissistic and full of herself as a person? Most possibly. At the same time, she grew up in the projects and was able to work herself up through education, intelligence, wit and sheer determination and dedication. I am glad that I read this book and I encourage others to do so as well.