#StandWithMueller
Home Book Reviews My Review of Michiko Kakutani’s “The Death of Truth: Notes on Falsehood... 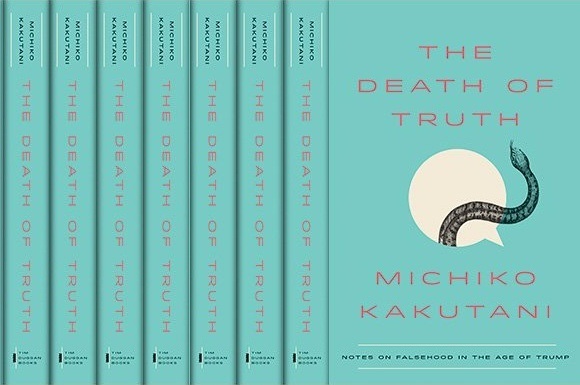 The Death of Truth: Notes on Falsehood in the Age of Trump by Michiko Kakutani
My rating: 4 of 5 stars

Michiko Kakutani in her masterful philosophical thoughts and musings shares with us the reader an outlook on how objective truth, facts and reality can be defined; and in the ways that demagogues throughout history have utilized language to distort truth and reality. Of particular interest, she places emphasis on Donald Trump and the current time that we live in. It is important to note that Kakutani emphasizes throughout her short book “The Death of Truth: Notes on Falsehood in the Age of Trump” that Donald Trump is a symptom of a cause that has been permeating within American society and culture for quite some time. In particular, demagogues such as Donald Trump have throughout history used “nationalism, tribalism, dislocation, fears of social change, and the hatred of outsiders” as a method of pushing people to be locked in their “partisan silos and filter bubbles” resulting in the loss or sense of a “shared reality” and the “ability to communicate across social and sectarian lines” (Kakutani, 6). We can see this in the reality that we live in today as a country and a nation. Donald Trump through his simple rhetoric, lies and distortion of reality helped along with the Russian interference have ripped up these fault lines within our society and nation at large.

As Michiko Kakutani shows in her reading, the “assault on truth is not confined to the United States” as around the world “waves of populism and fundamentalism are elevating appeals to fear and anger over reasoned debate, eroding democratic institutions, and replacing expertise with the wisdom of the crowd” (Kakutani, 8). As a result of various circumstances and social changes from globalism to the shifting of immigration populations, demagogues use these fault lines and the fears of change to scapegoat entire groups of populations. Thus, the demagogue is pushed up in the ashes of history. The question is can we as a nation, a people and western liberal democracy itself survive this onslaught coming from within, from the outside and through subversion in order to restore truth, facts, and a common sense of decency?

In order to be able to live in a free and just society in which reason and a fact-based way of life is the way that helps our country and humanity itself move forward, we need to be able to reply on a basic set of shared facts. In essence, a basic sense of a reality-based world in which up is up and down is down rather than the previously anachronistic but relevant in our time once again of up is down, down is up, 1+1=3.

Truth matters. Facts matter. Evidence matters. Basic decency matters. This book has helped provide us reasoned, rational and logical arguments and evidence that may help the reader have a clearer understand of how truth and reality itself can be distorted. A decent and good read.