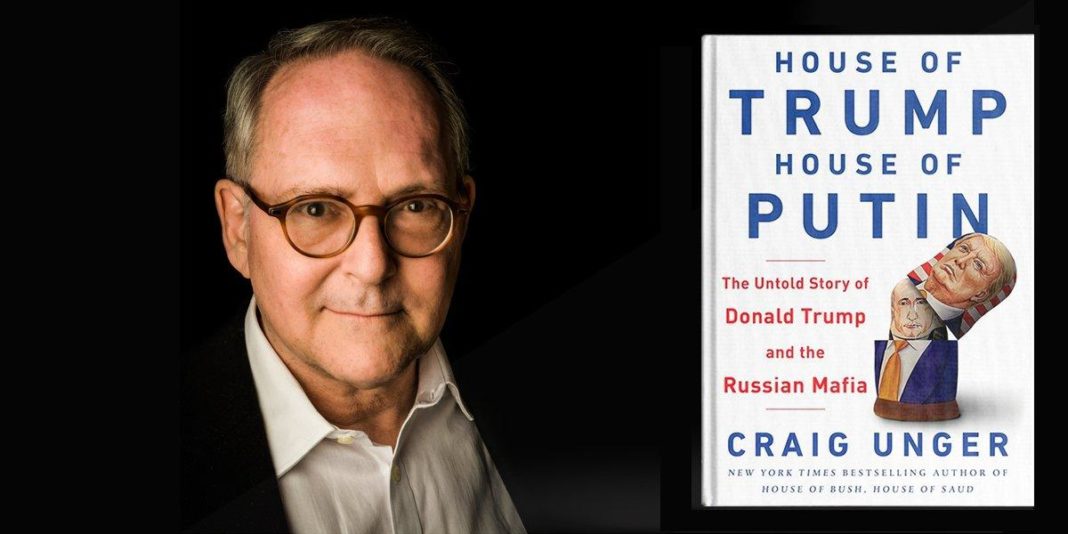 House of Trump, House of Putin: The Untold Story of Donald Trump and the Russian Mafia by Craig Unger
My rating: 5 of 5 stars

Craig Unger’s “House of Trump, House of Putin: The Untold Story of Donald Trump and the Russian Mafia” is a masterful work of evidentiary facts and evidence along with untold interviews with sources and retired law enforcement that helps put together a coherent framework in understanding Donald Trump’s longstanding ties with Russia, the Russian Mafia and the Kremlin. Unger’s book reminds me of the masterful book written by the esteemed journalist and author Seth Hettena in his book “Trump / Russia: A Definitive History” in laying bear the long-lasting connections and web of relationships that ties Donald Trump back to Russian money and the Russian mafia going back to his earliest days. What Mr. Unger does that is unique is he helps weave these various characters and connections not only in relation to Mr. Trump, but to the underworld of the illicit Russian economy to the present-day Donald Trump. In doing so, the question as to whether the Kremlin anticipated Donald Trump to actually become President from their earliest days of surveilling and cultivating him is one that is not so important; as it is obviously clear that the Kremlin has historically and routinely collected “kompromat” or blackmail information from various wealthy figures in the west. Who better to do so in a vain, insecure, petty, amoral and immoral malignant narcissist like Donald Trump? How fortunate would it be to have their man leading the western world like a piece on a checkerboard that would ultimately be controlled and maneuvered by Vladimir Putin himself?

For the majority of Americans who have worries about going to work and making ends meet in providing for their families, the narrative and tale of Donald Trump’s past can be sordid and hard to follow. The myth of Donald Trump the businessman has been dispelled, but one would be strained to explain how this connection has gone back decades to his earliest days. Some people might ask, what did the Russians do anyways or why would Donald Trump have to rely on Russian money? Dealing with morals or moral judgment has never been a requisite in doing business with Donald Trump. In fact, the less you have a moral backbone, the more Donald Trump prefers you. Donald Trump started providing havens for Russian mobsters and members of the Russian mafia before even the infamous Trump Tower was completely finished and ready to go. Why would such a spot be an attraction to many from the underworld? Simply put, Donald Trump had set up a unique arrangement in which individuals could use third party shell corporations to conceal their identities. In doing so in addition to encouraging cash only transactions, this was and is a vehicle for money laundering. In fact, Donald Trump was nearly $4 billion in debt when Russian money came to his rescue and bailed him out from his demise (Unger, 11). This book clearly lays out the evidence and the facts and helps the average person understanding clearly and without any doubt that at the very least, Donald Trump has been dependent on dirty Russian money to stay afloat; and without the Russians, Donald Trump would not be where he is today.

Donald Trump learned from the best or better yet stated, the most nefarious. His father was instrumental to him in acquiring his wealth as without him, he would have been a nobody. One can see this truth with the recent New York Times expose that has been released detailing the nearly $400 million in inheritance that Donald Trump received from Fred Trump. In relying on the most nefarious of characters early in his career was none other than Roy Cohn. Mr. Cohn was Donald Trump’s personal attorney who was known for representing Joseph McCarthy in addition to figures in the underworld of the mafia. One can say that Donald Trump learned some of us hardball tactics of attacking his opponents from Mr. Cohn himself. Trump Tower was set up in a way that condos could be sold to buyers using shell companies such as limited liability companies in order to shield and conceal the true identities of individuals. In fact, Trump Tower was one of two buildings in New York City that allowed such an arrangement (Unger, 18). In this way, illicit money was seen flowing into Trump Tower as such an ideal arrangement allowed persons with money obtained illicitly to be able to launder their money while obtaining ownership of the property (Unger, 18). Therefore, Donald Trump’s adventure into building high rises coincided with a unique time in history in which the Soviet Union was dissolving into lawlessness, corruption and oligarchy along with the shady figures of the Russian mafia underworld mixing along with the bureaucrats to create the post-Soviet era that we see today.

As Unger describes the mid to late 80s of the Soviet era, “two powerful forces in a newly created global underground economy had begun to come together. On the one hand, the disintegration of the Soviet Union had opened a fire-hose-like torrent of hundreds of billions of dollars in slight capital that began to pour forth from oligarchs, wealthy apparatchiks, and mobsters in Russia and its satellites” (Unger 19). And Unger continued, “Donald Trump’s zeal to sell condos, no questions asked, to shell companies meant that Russians could launder vast amounts of money while hiding their personal identities” (Unger 19). This book helps put together these interchanging pieces in time and place and demonstrates with evidence and clarity how Donald Trump is uniquely compromised and indebted to the Kremlin.

As Craig Unger describes the new form of hybrid cyberwarfare conducted by Vladimir Putin and Russia was that in its most striking and unique characteristic was that “barely anyone noticed that it was taking place” (Unger, 23). He further states that “Vladimir Putin had attacked the sovereignty of America and other Western nations, but almost no one reported on it in the newspapers, on TV, on the radio, on the Internet” (Under, 24). I will take it a step further and assert that the media was in fact complicit. Instead of focusing attention on the Russian attacks on our sovereignty and democratic process, the only focus they seemed to have was not to investigate Donald Trump’s encouragement of the Russian subversion but the banal contents of the hacked and leaked emails themselves. This was most probably done for ratings and bottom line profit; but by treating the Russian hacked information as novelties to be dissected and discussed on a daily basis, the media was emboldening and doing Vladimir Putin’s dirty work for him. Ironically, the media and the press that Donald Trump slanders and calls “fake news” or other slanderous terms enabled not only his rise but the work of the Kremlin on his behalf. As our intelligence community has stated unanimously and repeatedly, the goal of Vladimir Putin was to not only undermine and disrupt our civil society and democratic process, but to do so by undermining Hillary Clinton and actively supporting Donald Trump with the aim of installing him to office. Craig Unger’s book, “House of Trump, House of Putin” makes the case clear that we are currently living in a unique time in our history in which we have a person that occupies the highest office in the land that was assisted to office with the active assistance of a foreign adversary; a foreign adversary that Donald Trump is in debt to and owes his allegiance to. As I have stated previously, I strongly believe that this unique time in our history will be judged upon by our grandchildren and by the historic record. Think wisely and uniquely as to how you want to be remembered in the context of this unique time in history that we are currently living in; and one that will soon pass by to the ashes of history and the historical record.