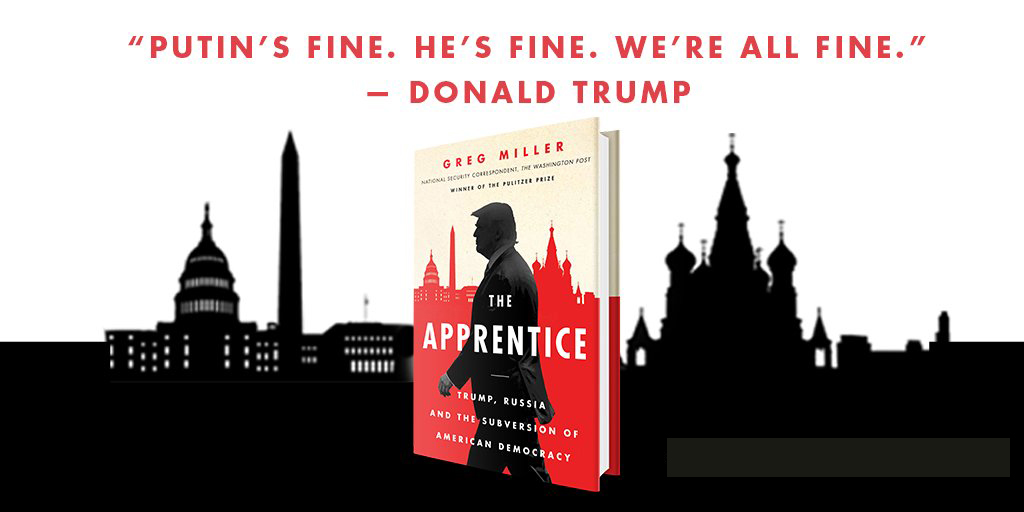 The Apprentice by Greg Miller
My rating: 3 of 5 stars

Greg Miller, a national security correspondent with The Washington Post presents to us his recently released book, “The Apprentice: Trump, Russia and the Subversion of American Democracy.” Mr. Miller is a Pulitzer Prize winning journalist and in writing this review, I may have been a little unfair to his book. I am an avid reader and of particular with Trump/Russia books; and what I found particular interesting in this read is the weaving of the overall narrative of the Trump/Russia story aimed more at a general novice reader wanting to recap him or herself with the overall framework of Donald Trump and how he is inextricably linked back to Russia and to the Kremlin. In doing so, Mr. Miller’s book is one that I would definitely recommend for the average person who is trying to gain a better understanding of how the entire narrative fits together with Donald Trump being in debt to and under the sway of Russian oligarchs and more specifically, Vladimir Putin.

“The Apprentice” doesn’t take you deep into the names and figures in the Russian underground world who have had ties to Donald Trump; but it does provide you the context and narrative of the Russian hacking and interference in our 2016 election to other such election interference in other European countries partaken by the Kremlin. It is important and vital for the reader to understand that in helping to install Donald Trump into the office of the Presidency, the Kremlin and Vladimir Putin’s goal has been to cause discord among the Western alliance in favor of a world order that is no longer led by the United States and our European allies. As Miller notes, “In late July, the agency had gained access to an extraordinary stream of information showing that Russian president Vladimir Putin was himself directing the “active measures” operation aimed at disrupting the U.S. Presidential race” (Miller, 8). “The Apprentice” does not also take you into the psyche of Donald Trump as much as the events surrounding this man from the moment, he became a serious contender to the present-day situation of denying the intel provided by our own intelligence community. In fact, when Donald Trump had the chance and opportunity to confront Vladimir Putin personally, he instead took his side against the unanimous consensus of our intelligence agencies. As Miller notes in regards to Donald Trump’s traitorous behavior, “He equated the credibility of U.S. intelligence officials sworn to defend the Constitution with that of the former KGB agent standing next to him” (Miller, 266).

In trying to understand the possible reasons as to why Donald Trump is apparently and clearly subservient to Vladimir Putin, Greg Miller in “The Apprentice” does a fabulous job in laying the framework of the Russian election interference with Donald Trump’s own personal interests. While this is a good read for the introductory beginner, this is all I would recommend it as: a good introductory beginning and summary of the Trump/Russia nexus. Greg Miller provides his analysis in a clear and easy read which will help the average layperson have a clearer understanding of 1) Why Donald Trump is subservient to Vladimir Putin and 2) Why Vladimir Putin spent time and effort in installing Donald Trump into the office of the United States presidency.