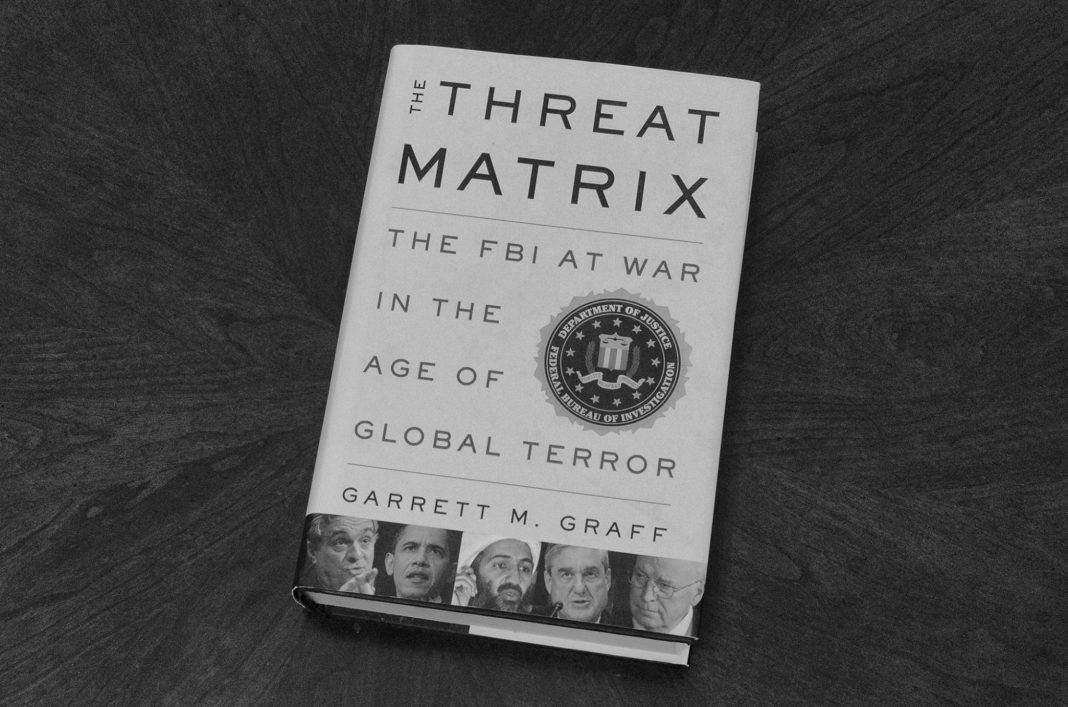 The Threat Matrix: The FBI at War in the Age of Global Terror by Garrett M. Graff
My rating: 5 of 5 stars

Author Garrett Graff in The Threat Matrix takes us on a journey of the history of the FBI to the present day circa 2013 near the end of Robert Mueller’s extraordinary 12-year term as the director of the Federal Bureau of Investigation. In it, he takes us through this journey starting with the foundation of the bureau and the historically controversial tenure of J. Edgar Hoover to the decades following through to the various threats our country has faced and the responsibilities and actions that the bureau took or failed to take. In doing so, Mr. Graff assists the reader in having a more full and thorough understanding of the bureau through its ups and downs, its successes and failures, and the consequential tenure of Robert S. Mueller III.

The Threat Matrix is given its title by the actual threat matrix that accompanied the PDB or the President’s Daily Brief in the years after the terrorist attacks that shook our nation on that fateful September Tuesday morning in 2001. At first it was chaotic filled with streams of raw intelligence that contained very little actionable intelligence. Robert Mueller himself had become director of the FBI just a week before 9/11 and the changes that Mueller would have to implement at the bureau were drastic and significant. No longer would the FBI serve as simply an investigative agency that solved crimes but rather and most importantly became a counterintelligence domestic organization that sought to prevent terrorist attacks before they happened. As Mueller has said in the past, this shook his foundations as he had become accustomed to dealing with criminal matters as a prosecutor. Nevertheless, Mueller the lifelong Marine that he is hunkered down and implemented drastic changes within the bureau that shook some feathers among the bureau rank and file but when he finally left in 2013, the bureau had become much more efficient and better because of it.

In one of the most important missions of his life, Robert Mueller supervised the terrorist attack that brought down Pan Am Flight 103. For Robert Mueller, walking through Lockerbie where this terrorist attack took place was the equivalent for him of what walking through the rubble of 9/11 would be. As Graff notes, “it was the moment when he rededicated himself to the pursuit of justice” in a very personal way (Graff, 152). In fact, he walked not only the mostly barren landscape but a small wooden warehouse where the items of the victims of this terrorist attack were stored impacted him greatly. He would carry this same zeal and determination for truth and justice for the decades to follow. He had this same drive and determination after 9/11 and there is no doubt that he has this same drive and determination now as Special Counsel in his quest to revealing to the American public the possible treachery of those Americans who may have sold our country out to Vladimir Putin’s Russia.

I highly recommend this book for various reasons. The first is the most obvious that it helps the reader learn and understand the historic nature of the development of the bureau from the very beginning of the bureau’s existence traveling to the bureau that Robert Mueller left in 2013. There were failures and successes but the determination of those in the bureau to help protect and persevere against our nation’s enemies have never been in question. Additionally, the reader is able to better understand the trajectory of the bureau with the various crime elements involved whether it has been the Italian mafia, domestic terrorists, international terrorism, the Russian mafia or a whole host of other nefarious actors. And most importantly it helps the reader learn and come to understand the tidbits that reveal the true character and nature of the lifelong Marine, public servant and patriot that is Robert Swan Mueller, III. Garrett Graff in “The Threat Matrix: The FBI at War in the Age of Global Terror” through his interviews with Robert Mueller and those that were close to him helps one understand the meticulous, thorough nature of Mueller in his pursuit for truth and justice. As I have always said, history and our grandchildren will judge all of us accordingly.