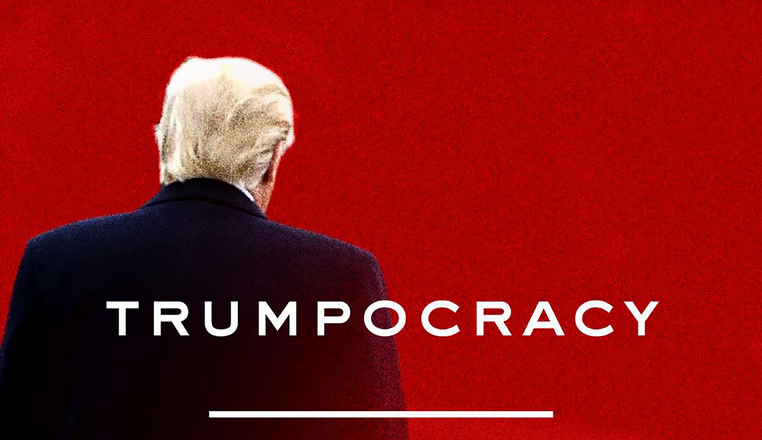 Trumpocracy: The Corruption of the American Republic by David Frum
My rating: 5 of 5 stars

David Frum’s timely and prescient book “Trumpocracy” is a vital read in not solely understanding the baseness that is Donald Trump – but most importantly those who have enabled him to come to this point in risking the security, reputation, and long term stability of our country in great risk. It is vital that we learn from the lessons of history and the implications that they can mean to our present situation. Donald Trump is a unique threat and we truly are living in a perilous time in our nation’s history. I truly believe that history will judge this time as to where people stood and the causes they advocated once history is recorded. The most amazing thing is to see the number of people who simply seem to accept the fact (or in denial) that Donald Trump and his campaign were involved in nefarious activities with a foreign adversary who tried to tilt our election in his favor. I believe that history will record Donald Trump as the *Asterisk President – one that history records as illegitimate. Before that time comes, we are faced with a unique threat in terms of both the debasing of our cherished institutions and democratic process; as well as this reckless malignant narcissist increasing the chances of a nuclear war in which millions of people can perish in the blink of an eye.

David Frum is a principled conservative who never sold out his soul, character, integrity and morals to support a demagogue. As David Frum excerpts from an op-ed he wrote toward the end of the election cycle on why he voted for Hillary Clinton, “Previous generations accepted infinitely heavier sacrifices and more dangerous duties to defend democracy. I am voting to defend Americans’ profoundest shared commitment: a commitment to norms and rules that today protect my rights under a president I don’t favor, and that will tomorrow do the same service for you.” As we have come to see in just the past year how true these words were then and resonate even more now. Putting America first is not about using demagogic tactics of the authoritarians, totalitarians and fascists of the first half of the 20th Century. It is not about being a liar and telling your core supporters that all news against the Dear Leader is “fake news”. It is not lying about lying and lying as a normal practice. We cannot allow Donald Trump to represent a new normal. Donald Trump is an aberration and a stain on both the office of the Presidency and to the history and ideals of our country. I look forward to Bob Mueller releasing his final report. And if warranted, treasonous/traitorous actions should have consequences. We will soon see whether Republicans in Congress have the slightest modicum of integrity and humility in putting country and humanity over the parochial whims of being members of Congress.

By the way, the tone and voice of the author was very much alive in this reading. Very good writer full of expression and wit.