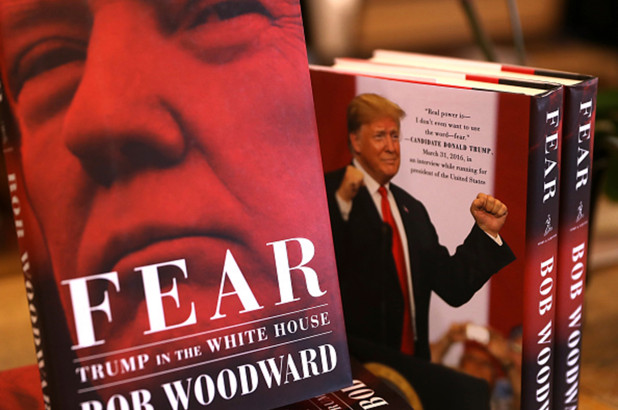 Fear: Trump in the White House by Bob Woodward
My rating: 4 of 5 stars

Bob Woodward’s “Fear: Trump in the White House” is the legendary Woodward’s latest insider account of a sitting U.S. President. In this authoritative account honed through hours and hours of meticulous investigative reporting and interviews, Bob Woodward adds his own historical account to the unprecedented chaos and madness that is the current occupant of the White House.

Many in the past have wanted to discount other similar books of insider accounts from authors such as Michael Wolff or from former White House insider Omarosa Manigault Newman. What Mr. Woodward adds that these individuals were not able to provide in their books is the authoritative voice and record of accomplishment that Bob Woodward provides and represents. As for those who simply discount any of the insider accounts written, Mr. Woodward has said that the notes and audio recordings will be provided in the future for the purposes of the posterity of history.

“Fear” is a most accessible read for the average reader with simple to read English provided in a straightforward manner. What this book provides is an outlet for the average American to have a better understanding and narrative of the mindset and mentality of the person occupying the highest office in the land. The level of specific quotes is astounding. “Fear” is truly an insider account that helps the average layperson to have a better understanding of the lack of cognitive intellect, and cognitive decision making that overruns the current inhabitant of the White House. As Woodward states, “The reality was that the United States in 2017 was tethered to the words and actions of an emotionally overwrought, mercurial and unpredictable leader.” Moreover, he continues, “Members of his staff had joined to purposefully block some of what they believed were the president’s most dangerous impulses. It was a nervous breakdown of the executive power of the most powerful country in the world (Woodward, 13). Woodward even provides a primary source document in a draft trade document that was pulled from the desk of Donald Trump by Gary Cohn and Rob Porter. Cohn and Porter who were in high-level positions of the White House as chief economic adviser and White House staff secretary respectively. A document in which Donald Trump was about to compromise and put into jeopardy the U.S. relationship with South Korea with a so-called dispute over trade. In doing so, Donald Trump might very well have jeopardized the THAAD missile system in South Korea. Additionally, the U.S. had an early warning system agreement in which the U.S. would be alerted within seven seconds of a nuclear test by North Korea versus the fifteen minutes it would take if the system were based in Alaska. The sheer level of incompetence and lack of cognitive faculties of the current occupant of the White House poses great threats to the stability of our country to an even greater degree moving forward.

In closing, nearly all those who work for Donald Trump understand him to be an incompetent nincompoop. Bob Woodward provides a narrative in which so many of the top level officials in the White House and those associated with the White House are simply working for this President to “hold the ship” for the country until this Presidency ends. Additionally, the further Donald Trump is stressed, the more he holds on to attempted acts of self-preservation through impulsive actions without any consideration for foresight or long term consequences. As Robert Mueller continues to close in on this President, there is no telling what kind of rash actions this President may take in an attempt to hold on to power and to avoid paying the consequences for his crimes. History and our grandchildren will judge us all and Bob Woodward equips the skeptical layperson in better understanding the chaos and happenings from a temperamentally unfit and ninny of a President.